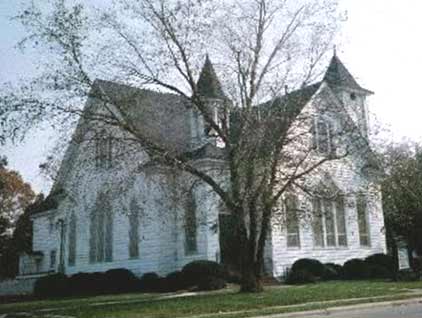 first known as the Church near Wiccacon

from Burkitt’s 1803 History of The Kehukee Baptist Association [org. 1765]
THE CHURCH NEAR WICCACON, BERTIE COUNTY, NORTH CAROLINA
“This church was a branch of the church at Cashie. Elder Dargan’s ministry was very much blessed;
and the work spread down into the lower end of the county and about Cochran’s ferry, on Chowan river,
at several private houses in the neighborhood, and at Capt. John Freeman’s meetings were holden. .
.several were converted in the neighborhood, and were baptized. Some of the first. . .were John Freeman, Esq.,
a man of eminent piety, and very useful in church and State; Capt. Joshua Freeman [1777]; Hardy Hunter,
Elder Hendry and others. After a sufficient number were gathered, they were constituted into a church in 1789.
Their meeting-house [which is a commodious building sufficient to accommodate a thousand people]
stands on the lands formerly belonging to Capt. John Freeman, in Bertie County, about four miles from Colerain.
After the death of Elder Dargan, this church was attended by Elder Welsh, who served them as an occasional pastor until his death;
and after his death, the church made choice of Elder Hendry [who was born in Ireland
and was converted and became a member of this church after his settlement in this neighborhood] to be pastor. . . .
. . . the brethren have generally been lively in religion, and were not so frequently complaining of coldness as some other churches. .
. . of late, about sixty have been baptized in two years. Their number at present is about one hundred and seventy-three.
Their meetings are holden the Saturday before the third Sunday in every month. Quarterly in September, December, March and June.”

Clerks prior to 1849: Timothy Walton, Stephen Thatch, B.H. Ward, John Williams, J.L. Morris, Etherton Wilson,
J.W. Beasley. .
.Bro. Etherton Wilson was a man of sterling worth, Honesty, Truthful, Sober, of fine Judgement and executive ability,
of unquestioned piety, a man whom all men spake well. . .There was not a man in the county whom the people esteemed
higher than they did Bro. Etherton Wilson.
. there has gone out two preachers from her membership in 131 years: Rev. John Nowell and the Rev. B.B. Williams.
Bro. Williams was licensed to preach Oct. 1852 and in September 1854 was granted a letter of dismission with 30 other
Brethen and Sisters and organized Mars Hill Baptist Church, . . Bro. Williams was ordained and assumed the charge
of the new church as Pastor. Bro. Williams . .came back and served his old Mother Church as pastor for several years.”
“At the April Meeting 1853 Colerain Baptist Church sent word to the Association by her Delegates that she was ready
to pay her part of the salary of a Missionary to China as soon as one could be found that would go. . .
“After several years . . at their place of worship known as the old Colerain Church, some of the brethren thought it would
be best to procure a site in the Town of Colerain, and erect a building and sell the old property. Sentiment was somewhat
divided, but after a while it was decided to move in the Town.
On July 1883 Mr. E.E. Etheridge gave to the church a Deed for one acre of land where the church now stands. .
.on the completion of the house the 3rd Sunday on June 1892 was set apart for the Dedication of said House.
Bro. C.W. Scarboro preached the Dedicatory Sermon after which a recess was taken of two hours
and the large congregation was bountifully fed and watered..
.The tolling of the bell recalled the people and Bro. T.G. Wood gave a lecture on the qualification of a Deacon,
after which Brethren W.B. Watford, Jos. W. Outlaw, Jos. D. Evans and William L. Norwell were ordained as Deacons
Rev. C.W. Scarboro, T.G. Wood and B.B. Williams assisting in the ordination services.
During the pastorship of M.P. Davis a new structure was conceptualized. [Davis] worked most diligently in each and every thing .
. to the completion of the building. The Brethen and sisters came to his aid, all working together in union love and harmony .
. The people not members with us helped us generously for which we return our sincere thanks. .
.Today finds us here 19 years from the dedication of the last House of worship with this magnificent Temple without a penny due thereon.. . . . Bethlehem, Mars Hill, Harrellsville, Bethany, and Christian Harbor are all descended from this church
and Holly Grove, Ross, Capeharts and possibly others have partly descended from her.”
[I am indebted to Lynn Macarthy for copy of Uncle Will Rayner’s speech]