(from ca. 1952 clipping from the Roanoke-Chowan Daily News) 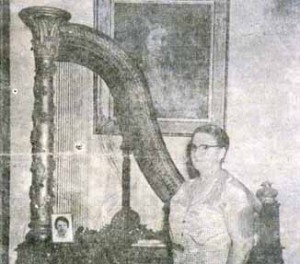 Mrs. J. Raynor Moore, home Clubwoman exceptional, stands beside her harp piano made by Augustus Stern. The only one like it is in the Smithsonian Institute, Washington.

By F. Roy Johnson AHOSKIE — Mrs. J. Raynor Moore, inspired with a desire to ever do better things, today may be recognized for playing an important and dynamic role in the development of the home demonstration movement in Hertford County. I, like many other people of the area, had heard a lot about Mrs. Moore and the work she had done for her home demonstration club of Maple Lawn — for the county council — and for general interest in community and county affairs. But there wasn’t the realization why she is such a driving force until I had occasion to visit her home near Powellsville earlier this week. It’s easy to tell you why now, for the reason is such a clear one. Mrs. Moore is interested in doing things; she is very interested. And her devotion is not just to home demonstration work; it extends on a broad plane lending to variety. I detected the quality which had made her an outstanding housewife, mother, and community builder when she took me from room to room showing the heirlooms of the Moore home. Here she betrayed a keen sense of appreciation for the fine points of the many old pieces. And during conversation, I deduce she had an activity on schedule every day this week, concluding with the Chowan College alumni meeting in Murfreesboro Saturday. Mr. and Mrs. Moore and their family have good cause to be proud of the heirlooms. Many of them belonged to Major John Wheeler Moore, the famed historian and Ann Ward Moore of about a century ago.
Mrs. Moore had been a housewife ten years before the Maple Lawn Club was organized April 1939. Seven other ladies met with her in her home and formed the club. Mrs. Moore became the first president and Mrs. L. R. Sessoms, the first secretary. The club became active immediately; and since there were no home clubs in nearby Bertie county “we invited some of our neighbors in that county to join us so we would have a nice club.” She says the original members who are still working in the club are Mesdames T. W. Hudson, S. L. Hudson, W.T. Mitchell, A.D.Holloman and herself. She looks back with pride to the fall of the year the club was organized, for “at the County Achievement Day we brought home the pressure cooker for having 100 per cent of our members present. The club has since won several prizes, has always been represented at county council meetings, has furnished the president, secretary and treasurer of the county council at different times and secretary-treasurer of the 16th district for three years. Maple Lawn members have also served on various county and district committees. The members are well rewarded for their work, Mrs. Moore believes, for “we have learned to make the best better and we now know our neighbors and look forward to seeing each other each month at club meetings where we gain much helpful information.”

below: Clipped from the Hertford County Herald 1952