Capehart’s Chapel of the Holy Innocents near Avoca 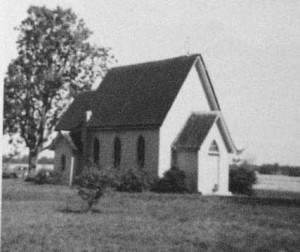 The “small vestibule was added several years after the completion of the building. The walls and ceiling are of natural wood which have darkened with age. The pews are square, of natural wood, and would seat approximately 100 people. There is no electricity and the only heat is a wood stove. The chapel still contains a marble baptismal font which was a gift from Dr. W.R. Capehart to his mother, Susan Martin, who presented it to the church.
The lectern is on the opposite side of the chancel. The communion rail divides the chancel and the sanctuary is a plain wooden altar. The altar hangings were made by Miss Margie Green when she was over 80 years old. Over the altar is a stained glass Gothic window. The other windows in the nave of the church are Gothic with plain glass. To the left of the chancel is a small vestry room.
In 1879 Cadmus Capehart began building a chapel on a plot of land on his plantation, Elmwood, for his family of seven children. The Capeharts attended services at St. Thomas Episcopal Church in Windsor and St. Paul’s Episcopal Church in Edenton, but the journey was a long one to either place for seven small children. . . The chapel was never completed at Elmwood due to the sudden death of Cadmus Capehart and the removal of his family to Scotch Hall.
It was then decided by George Washington Capehart of Scotch Hall to move the foundations of the chapel to its present site where it was completed in the early part of 1880 [at a total cost of $500] on an acre of land given by Dr. W.R. Capehart of Avoca. The chapel was named ‘The Church of the Holy Innocents’ by Mrs. Cadmus Capehart (Mary Martin Capehart), ‘as being the most appropriate name (in her opinion) for a church to rear her little children in’ where they might learn the teachings of the church. Through all the years this tradition of a church for the children remained and much of the history of the parish has been that of a little group of children gathered around a mother, an aunt or a grandmother, learning the Lord’s Prayer, the Creed, the Ten Commandments and the Catechism. . . . the Rev. Edward Wooten, rector of St. Thomas, held services at Holy Innocents’ the third Sunday of each month.
On April 12, 1880, the chapel was consecrated by the Right Rev. Theodore Benedict Lyman, the Assistant Bishop of North Carolina. He was assisted in the services by the Rev. Wooten, and the Rev. Robert B. Drane, rector of St. Paul’s Episcopal Church. – from article by Jeanette White in The Bertie Ledger-Advance, Windsor, NC, September 28, 1972. 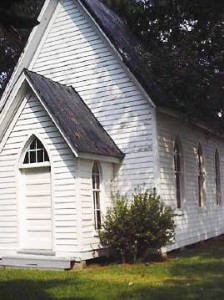 One thought on “Capehart’s Chapel”