Neither Snow Nor Rain Could Hinder
The Mail Man; He Will Retire May 31
(clipped from Gates County Index May 28, 1959)

To Retire– After more than 40 years as a rural carrier, T. Beaurie Parker of Gates will retire after next Saturday. Normally he leans out the window of his car to place mail in the boxes along his route but he climbed all the way out to have his picture took. 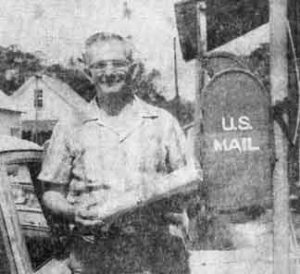 Gates— Through all kinds of weather and road conditions T. Beaurie Parker has been the bearer of joyous and sad tidings. … Parker has served under four different postmasters and in three buildings. His mail route has almost doubled since he began as it has increased from 26 miles to 51 miles at present. It used to take around 13 hours a day, and now he finishes in about six. He began his work as a carrier in May 1918 during World War I and was called to the Armed Forces in August of that same year. He landed in France on November 10, the day before the armistice was signed so he did not see any action. After serving about eight months, he came back home arriving on a Sunday. He resumed his job as the carrier on Monday. In those first months, Parker used a road cart in the summer and a buggy in the winter to transport mail to his patrons. Then he bought a Model T Ford but still had to use the buggy most of the time in the winter as the roads were so bad. Once during the big snow in March 1927, the trains could not get through, so there was no mail delivered for ten days. Mrs. Parker said that he would come home some cold nights with ice on his glasses and the front of his overcoat frozen. He recalls getting stuck in the mud many times at the George Langston home. It seems that road was most always in a terrible shape, but Langston, now deceased was a fine gentleman and always ready to help him get out. He would say to Parker, “Here I am sitting by my warm fire toasting my toes, and you are out here stuck. I wouldn’t have your job for anything.” But next summer the tune would change. Parker would ride along whistling and often stop to get a drink of water. Langston would be following a mule, wiping sweat and brushing the flies and gnats away. Then he would remark, “Wouldn’t I like to have your easy job!” He has always found people to be friendly and willing to help in times of need. One day something happened to the steering gear of his car. Before he hardly knew what was happening his car was a straddle a fence. One of his good patrons who liked his toddy came along and told him, “Now if that had happened to me, they’d say I was drunk.” And then he added, “How about you?” Parker jokingly answered, “You will just have to be the judge.” Another patron, George Eure, would mix meal with water to give his horse on a hot day before letting him drink. He said that would cool the horse off. Rural carriers have been called on time and again to do shopping, banking, and other errands. Parker told of a fellow carrier, Herbert Copeland of Ahoskie, who has retired after 52 years. Copeland said that he would do anything for his patrons but match lace. He had to draw the line somewhere. Parker, the son of the late Mr. and Mrs. Timothy Edward Parker, has lived in the Sarem community all his life on the farm where he was born. He is married to the former Lilly Smith. She was born about three miles from his home. They are the same age and graduated from Reynoldson in the same class. They have five children, Mrs. Louise Neble and J. B. Parker, who live on adjoining farms to their Dad, Mrs. Lillian Riddick Truman of Canada, Mrs. Ellen Turner of Norfolk and Miss Ethel Parker of the home. When asked what he intended to do upon retiring he answered: “Look after my wife and work the garden.”