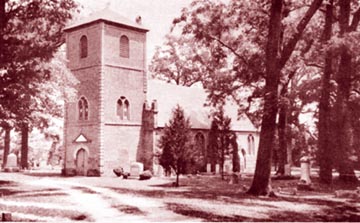 This is my working hypothesis – the way I see it as of this moment!!
following an analysis by Dr. Barry Hayes

24 Sept. 1652 -Deposition by William Chapple, mariner, James Vawer, pilot, and John Fisher Carpenter, all of the ship Mary of Accomac in Virginia: They were at Accomac last July, bound for Bristol, when they met one John Jones. This Jones died of fever, after saying that he had 40 hhds of tobacco in the hands of Robert Braswell, a merchant living on Pagan Creek on James River in Virginia.. [p104]
6 Dec 1652 – another depo by William Chappell, master of the Mary of Accomac in Virginia.
1653 – He was elected to the House of Burgesses of Virginia, but since it was not considered proper that a minister hold a political office. “It is ordered by this present Grand Assembly, that Mr. Robert Bracewell, Clark, be suspended . . . since it is unpresidential and may produce bad consequences.”
10 June 1658 – Thomas Wilkinson made a large patent on Patomack Creek and used Robert Braswell as a headright.
20 Jan 1661/62 – Robert Braswell and Joseph Bridger owned land adjoining 300 acres patented by Richard Izard.
16 Feb 1662/63 – Thomas Poole secured a patent adjoining Mr. Robert Bracewell.
9 June 1664 – Robert Braswell appointed William Thompson his attorney in a suit with Thomas Hopkins: witnessed by Robert Tookes.
26 June 1664, William and Elizabeth Thompson sold Richard Izard some land adjoining Robert Dunster and Robert Braswell.
9 Dec 1665 — Richard Izard depo aged 54 – –
15 Feb 1667/68 Robert Braswell made his will; it was proved 1 May 1668 in Isle of Wight County VA.

Isle of Wight Co.VA Will of Robert Bracewell 15 Feb 1667 prob 1 May 1668
– to my daughter Jane Stokes her children three cowes
– to Rebecca West my daughter one cow and Calfe and one cowe and calfe to the next child she may have
– and the rest of all my estate unto my two sonnes Robert and Richard whome I make my full and sole executors of this my will, and the Mill I desire shall be finished with what speed my bee and to be lett out,only reserving corner for themselves, and the p.duce of the mill to be equally divided between them both, and reserved to build a new mill hereafter and when built to be left wholly to my sonne Richard likewise I give seven hundred acres of land where I now live and six hundered acres at the western Branch of Nancemond County to be equall divided between my two sonnes Robert and Richard likewise it is my desire that noe part of parcell of the estate shall be disposed of nor none of the land untill they both are of full age nor no wayes divided but if it shall please God that either of them shall depart this life before he comes of age that then the survivior shall enjoye the whole
– likewise I give unto my servant Elizabeth Hall when she shall be free one heiffer of two years of age
– and likewise it is my desire that my lvonign friends Mr Richard Izard and George Gwillim to be guardians unto my children in the time of their minoritie and to see this my will performed likewise I give unto the said Richard Izard and George Gwillim fortie shillings to each of them to buy them each one ring,
– likewise I give unto my daughter Ann Bagnall one cow and calf and one cow and calf to her first child,if it please God she have any
– and likewise it is my desire that my two sonnes Robert and Richard shal be put to scholle until they can both read and write.
And this being my will I testifie it with my hand this 15th of February 1667.
Rob Bracell
In Wittness of George Gwillim Richard Izard
This will was proved in open court helf for the Isle of Wight County this
first day of May 1668 and then recorded Teste John Jenings Clr: Recordes

On 1 May1668, Mr George Gwilliam and Mr Richard Izard qualified to act as overseers of Robert Braswell’s two sons until they might be of age to act as his executors; they were bonded by Mr. Thomas Green and Richard Penny.
The estate appraised on 11 May 1668 by Gyles Driver, Benjamin Beall, Robert Coleman and Francis Ayres included 63 head of livestock, a servant boy, a library valued at 500 pounds of tobacco, a sloop, silverware, and cattle at William West’s and Mr. Robert Stokes’s plantations.W&D B2-p55 IoW VA
Rebecca Izard signed an account of the estate of the late Mr. Robert Braswell in the hands of Richard Izard on 10 Jan 1669/70.
Izard by will 2 May 1669 gave this to his two daughters Mary and Martha. Mary dying before any division was made it therefore fell to Martha now wife of said Rutter. 30 Oct 1686. Walter Rutter now sells to Joseph Bridger. 8 Oct 1696. Walter Rutter and wife Martha sell to Joseph Bridger for 1200 lbs tbco. parcel of land in L P called Herrong’s plantation now occupied by Edward Browne — to James Benn’s line. 8 Feb 1696. Thos Godwin, Edward Streeter, Tristram Norsworthy, Thomas Owen.
6 Mar 1670 Thomas Taberer assigned a bill to John Gardner against Rebecca Izard, was left with John Burnell.
Sept 14 1670 Rebecca Izard pat 250 acres escheat land in behalf of her two daughters Mary and Martha Izard formerly granted to Richard Izard dec.
see info posted by Nona Williams on her Izard Blog

Children of Robert Bracewell and wife:

In the Court Orders of Isle of Wight County Virginia – Court of 9 October 1694 page 51 is found:”Octob.r 1694: Order is granted SUSANNAH BRASWELL ag.st JOHN COLLINS sen.r for foure hundred pounds of tobo: for looking after the sd COLLINS his wife in her late extremity when beaten by the sd COLLINS with costs ats EX.o. It appearing to this Courte that JOHN COLLINS SENr hath lately most depserately beat bruised & wounded MARY his wife, insomuch that it was expected she would have lost her life thereby (as alsoe between whom former strife & contention hath been) for prevention for the futur, & one thousand pounds of tobo: in October yearly for the tyme to co?? sd MARY her mainteynance (if she finde cause) To live separate & aparte from hus husband and Costs ats EX.o. Mr. THO: TABORER agnt. JNO COLLINS SENr Defendant appearing & standing mute at the bar, Order is granted plaintiff agst. the present sheriff for 3585 lbs. of tobacco d___by defendant & proved by oath of Mr. THO: MOOR.”

(Isle of Wight Deed Book 1, 1688-1704, p. 202)
“These prsents wittnis that I ROB:t BRASWELL of the Isle of Wight County in verginia Constitute & appointe my Loving wife SUSANA BRASWELL to be my lawfull attorney to m?? and in my name to procecute and sue all such persons as are in debt to me and to an??? suites which I have Depending in the Isle of Wight Courte in wittnis heare unto I Se? this 27 day of march 1696 Wittnes JHO: MOORE ROBERT BR_CELL EDW.d EC CHAMPION his mark.”

Will of SUSANNAH BRASWELL October: the 22: 1714 prob June 26:1732
the Upper Parish of the Isle of Wight County in Virginia
-unto my Son RICHARD BRASWELL and to his Heirs the plantation I now live upon with Sixty Acre of Land I say to him and to __ ever
– unto my Son WILLIAM BRASWELL my Old Plantation House with fforty Acres of Land joining to it out of the Hundred Acres in all I sa__ his Heirs for Ever & Ever.
– to ELIZABETH BRASWELL my Granddughter (sic) a Heifer of three Years Old, and one brass Kettle, one pewter Dish, one pewter __ four Spoons, one Box Iron and ffire Tongs.
– to my Son WILLIAM BRASWELL a Chest of ffeathers, a small Iron Pot one pewter Dish and one plate, and o__ Pot and a Cup and four Spoons
– to my Daughter ANN one Shilling
– to m__ Grandson JOHN RIGGS One Shilling
– rest of my worldy Goods within Doors and Without I Give and Bequeath unto my Son JAMES BRASWELL to him and his Heirs
– leaving my Son RICHARD BRASWELL and my Son WILLIAM BRASWELL my true and lawful Executors to pay my Debts and to receive what is oweing me
– I desire you my trust __ RICHARD JONES & RICHARD JORDAN to see this my last Will and Testament performed. SUSANNA B BRASWELL
WIT: WILLIAM: ALLEN; RICHd [R] JONES; RICHd [R] JORDAN

Note: DNA analysis shows that NONE of the children of Robert Jr and Susannah are lineal descendants of the Rev. Robert Bracewell. a link to Carey Bracewell’s Braswell DNA web site http://www.carey-dna.com/