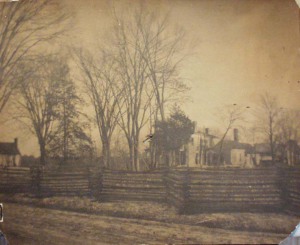 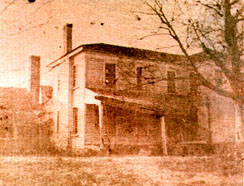 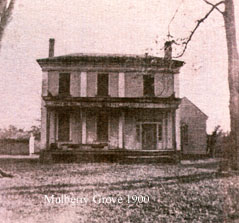 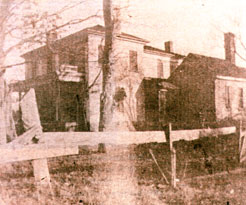 view showing the detached kitchen
and enclosed porch connecting the brick portion to the wooden section. 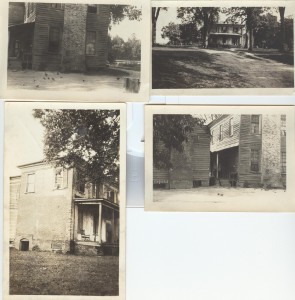 The brick section of the house was over a full basement which had a floor of square brick tiles. It was used to store wine and preserved foods. There were no fireplaces.
As the above picture shows there were metal vents – one on the east end plus the door
and two vents on the west end. 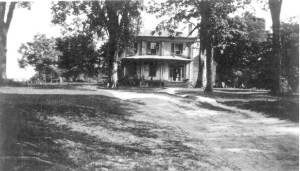 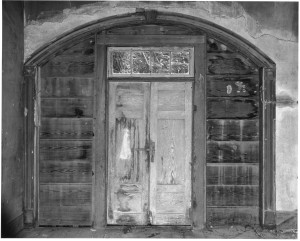 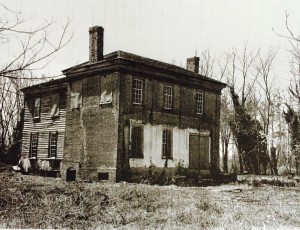 The house was originally 1756 a one-and-a-half story brick dwelling, which was raised to two stories, remodeled ca 1830 as Greek Revival and expanded by Dr. G C Moore. 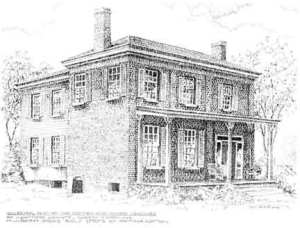 drawing commissioned 2000 by Raleigh Sutton
note: the brick portion was covered with white stucco
and there was porch on west side of rear wing
where a lot of living took place as well as on the porch on the east side 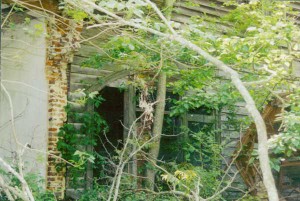 Mulberry Grove 2000
view from the East; the east wall of the brick section has fallen exposing the plastered walls still in fine condition
— the arched entrance of the dining room can be clearly seen
as well as the fallen upper level of the porch on right [roof?]
photo by Sally.

The house was built about 1758 by Capt. Arthur Cotten 1716-1789;
who lived here,
– as did his son Godwin Cotten 1761-1830,
– granddaughter Easter Cotten and her husband James Wright Moore 1773-1815,
– great-grandson Dr. Godwin Cotten Moore 1806-1880 [who made extensive renovations to the house in the mid 1830’s] and
– great, great grandson William Edward Moore 1847-1920 with their families. Located two miles north of old St. Johns, Hertford Co, North Carolina. The front section of the house was of brick covered with a white stucco; the rear wing was wood. This property was bought from the heirs of John Beverly who had willed the place to his two grandsons.
On the 20th Nov 1752 William Beverly of Craven County, SC agreed to sell to Arthur Cotten his part and on 11th Nov 1758 Henry Beverly of Johnston County, NC sold his part to Arthur Cotten.