[e- mail from Paul Murauskas :
I in fact do have a copy of the record of Michael Britton’s family. This record was in the possession of Augustus Bass who married one of Michael’s daughter’s. I don’t remember which one. This record was written in Michael’s own handwriting, which Augustus Bass had to attest to. I believe it was proof for Rev. War benefits for the descendants of Michael Britton. Below are the remarks taken from the family bible page. The spelling of the names are exactly as Michael wrote them.
Michael Britton’s birth was in 1763 in Hertford Co., NC.
His wife was Nancy (unknown). Death was December 1840.
Rev. War participant: Source Genealogical Abstracts of Revolutionary War Pension Files Vol. I: A-E, Abstracted by Virgil D. White, The National Historical Publishing Company, Waynesboro, TN 1990.
Children:
Thomas Briton born 3 April 1793, Hertford Co., wife is Martha.
Samuel Briton born 1 Sep 1794, Hertford Co.
David Briton born 16 June 1795, Hertford Co.
Lemuel Briton born 19 July 1797
Celah Briton born 29 April 1802
Elesebeth Briton born 23 April 1805, Hertford Co.]

Deed Book pg. 115, John Brittian, Cooper of Hertford Co. N.C. to Micheal Brittian of the same. Has given to Micheal Brittian,100 acres in Bertie Co. N.C. east of Quioccason swamp in Capt. John Campbells line . and also the peice of land that I excepted of Wills in my son John Brittian deed this I give to him. Wit: John A. Wynns, Susanna Wynns, Samuel Rayner, Jemima Brritian , 1785 Court 1790, Oath of Samuel Rayner

Deed The Jan. 21, 1785 , between John Brittain Sr. of Hertford Co., N.C.
Give To John Brittain of the same. Plantation Messuage or Tract or Parcel of land on the east side of Quickoson Swamp begining at a red oak in William Rayner line to pine land divided former Ward and Wells. 180 acres.
Excepting the prevledges of geting White Oak Timber on it as long as I live if I request.
Wit: Josiah Perry, Millison Perry, William Perry, Bertie Co., court Feb. 1785

Judith Brittain 1755/74 – Feb/May 1811 Bertie Co [will]
will signed 10 Feb 1811, proved at May Ct 1811, “..being weak in body…”
brother George Brittan – bed,
to Fanny Brittan (daughter of my brother Daniel Brittan) – bed.
sister Elizabeth Outlaw – Negro Betty, one chest.
sister Ann Mizell – Negro Fillis for her lifetime and at her death to her heirs.
to West Mizell (son of Hezekiah Mizell) – Negro Hardy when he is twenty one,
but if my mother should die before that time I lend the said Negro to his father until the said West comes of age.
Remaining estate to be divided between
my three brothers and three sisters
Benjamin Brittan, Michael Brittan, Daniel Brittan,
Elizabeth Outlaw, Ann Mizell, and Jemima Brittan.
EX: Hezekiah Mizell WIT: Hardy Freeman, Jon. Holley 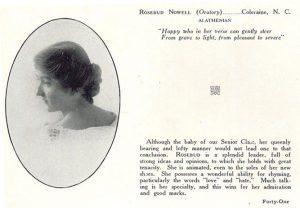 ….The most prominent Contemporary of the Rosemead Vicinity was the late Hon. Daniel W. Britton, who lived across the Barbecue Swamp, west of Rosemead. He was an ex-representative of Bertie County in the state legislature at Raleigh, NC and was a successful Merchant and Mill man, and owned a large plantation, and was esteemed by all who knew him. He had a brother the late Hon. John C Britton who was a ex-representative of Bertie County in the state legislature at Raleigh and who was a successful business man and owned considerable wealth in and around Powellsville, NC. They were both born and reared just across Barbecue Swamp 1/2 mile from Rosemead, and the sons of the late John L Britton, who was a man of much prominence, and owned on of the largest plantations in the Rosemead section. — “History of Rosemead” 1937 by AJM Perry.

e-mail from James E Moore
Now my grandfather James Walter Harris
was born about 1895 or 1898 as I remember.
He didn’t marry until he was 35 or thereabouts.
My grandmother Martha Jane Ausbon/Osborne was about sixteen.
My mother was the first child born in 1931.

Now James’ parents were Robert E. Harris and Alice
Britton. They lived at Bear Grass in Martin County
near the Beaufort County line. Her parents were James
Alfred Britton and Nancy Holliday.

Friday night one of my mother’s first cousins called
me up. She’s trying to put together a Harris genealogy.
So I racked my brain and went looking for
what little I had. Last night I found some notes from
a conversation with my mother’s great-aunt Nina
Britton (Mrs. Luther Britton) about 1980.
She said that James and Nancy Britton lived at Oak Grove in
Pitt County. Then she listed their children as Bob,
Tom, Luther, Pattie, Bettie, Ada and Della.
Obviously
Alice was in there somewhere.
She just didn’t say where.

This morning I discover on your website under the
Brittons a James A. Britton,born 1848, married at
Belvoir in Pitt County in 1867 to Nancy Holiday, born
1846. She’s the daughter of Samuel Holiday and
Elizabeth Manning. Their children are Alice, Robert,
Wm. T., Jos., Mary and then Henry Luther married to
Naomi Whichard. If this is correct, then Alice would
have been about 25 when she had my grandfather and 62
when my mother was born. My mother remembered her
quite clearly and recalled her funeral. She must have
lived up until 1940. So these must be the same
people. Don’t you agree? Your website says that
Henry Luther and Naomi were the grandparents of Cliff
Britton. In my notes, I show them having seven
children with Clifford of Hamilton, NC as the
youngest. Do you have any contact info for this
Cliff?

researching these Brittons:
Paul Murauskas, Janet Briton, Dorothy Jackson as well as myself