Josef Krauskopf was born 23 Jan 1807 in Podmokly, Bohemia, the son of Markus Krauskopf and wife Amelia.[Anna]
Josef received the marriage consent dated June 24, 1841, number 31530.
Josef Krauskopf and Ludmilla Federmann were married 18 August 1841.
daughter of Marcus and Hannah Federmann of Zihobce
Josef and his wife Ludmella emigrated from Bremen, Germany arriving in New York City on 22 Oct 1869 on the “Rhein”.
Josef Krauskopf was a clergyman.
per 1920 census his daughter Jennie arrived in 1863 and married Jacob/Sylvan H Pick about 1865 in NYC,
His older son Morris/Marcus arrived 1866 per 1920 census.
His younger son Samuel came to New York City on 1 June 1867 on the “Deutschland.”

” the quintessence of religion is doing deeds of loving kindness.”

The name “Krauskopf” translates “curly head” from the German. 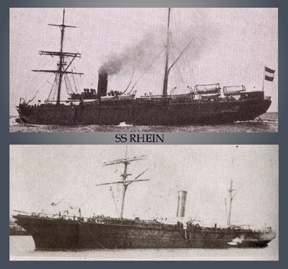 DEUTSCHLAND (2)
Sailed from Bremen and belonged to Norddeutscher Lloyd (North German Lloyd). It was a 2800 ton iron steamer built by Caird & Co. at Glasgow in 1866. She had a clipper stem, one funnel and two masts, single screw and a speed of 11 knots. There was accommodation for 60 1st, 120 2nd, 700 3rd Class passengers. She left Bremen for Southampton and New York on 14.10.1866 on her maiden voyage. She stayed on this service until 1875 when she was wrecked off Kentish Knock, in the Thames Estuary with the loss of 157 lives. ..[Posted to the Emigration-Ships Mailing List by Ted Finch – 12 July 1997]

I thank you again for your help. It’s interesting how I just happened upon your webpage and hit paydirt! I’m still trying to ascertain the connection between these Krauskopfs and the mother of the brides and groom: Sarah Krauskopf born in Podmokl. She married Baruch Wotiz, my greatgrandfather’s brother. Joan