Joseph Sanderlin and Charity Sawyer were married in Camden Co, NC ca 1795.
My Joseph Sanderlin was either
CASE I: the son of Robert Sanderlin and his wife Mary Waff and was born in Camden Co. ca. 1765 [the 1800 and 1810 census seem to indicate he IS the younger man.]
CASE II: the son of the widow Mary Sanderlin and was born ca. 1757. [it could be her son as this Joseph named his first son Maximillian, and he was guardian to Lemuel and his sister. this man must have died after 1782 as I found only one Joseph in the census for 1790, 1800 and 1810]
his youngest child Henrietta was born after the death of Joseph according to a deposition by her guardian.
In Camden County Deed Book Q page 59–Division of the land of Joseph Sanderlin on 16 Oct 1818.
Charity Sawyer, daughter of Evan Sawyer and his wife Sarah ______, was born ca 1776 in Camden Co NC.

Other Camden County Records:
11 Dec 1792–Joseph Sanderlin releases all claim to the land after the death of Benjamin Sanderlin to Samuel Ferebee.

Robert Sanderlin, in his will dated 1778, names his sons Joseph and Benjamin.

In 1808, the Messengers from Sawyers Creek Baptist Church to the Chowan Baptist Association were Thomas Etheridge and Joseph Sanderlin.

Joseph Sanderlin was guardian to the orphans of Maxey Sanderlin, son of Ezekiel–Lemuel and Nancy (records found 1804 through 1809).

Loose Papers — State of North Carolina, Camden County, In Equity
To the Honorable Judge of the Superior Court of Law and Equity for Camden County:
The petition of Henrietta Sanderlin by her guardian, Maxey Sanderlin, humbly complaining. As she was a post-humorous child, her part of her father’s estate was set off to her out of the parts or shares of her siblings. The forty acres of her portion of her father’s estate is in five separate and distinct small pieces, none of which adjoins the other. [they ask to sell it] So Ordered. Fall Term 1829.

These sketches appeared in Delke’s “History of the Chowan Baptist Association.” ELDER LEMUEL SANDERLIN, BORN IN CAMDEN COUNTY 1794–DIED 1855, AGE 61. He professed religion in Tennessee and united with the Methodists. In 1824, having returned to his native county, he was baptized into the fellowship of Sawyer’s Creek church and ordained in the Association 1845. The insidious errors of Campbellism were then making rapid advances.. Against these, he was a firm opposer. He was the pastor, at different times, of Elizabeth City, Shiloh, Providence, Shady Grove, North-west (VA) and Black Water (VA) churches.

ELDER THOMAS ETHERIDGE, BORN IN CURRITUCK COUNTY 1752–DIED 1810, AGE 58. Brother Etheridge entered the ministry in his 30th year, suffered severe trials from the churchmen and mob violence. He became Pastor of Sawyer’s Creek church and occasionally of Knob’s Crook, Coinjock, and Powell’s Point. Near the close of his life, a cloud obscured his hitherto spotless reputation, yet God, in His mercy prepared a way of escape and he died as the righteous man dieth.

Enoch Sanderlin was born in Camden County, NC ca 1805 the son of Joseph Sanderlin and his wife, Charity Sawyer. He signed his will 12 April 1840, his executor proved it at May Court 1840.
Last will of Enoch Sanderlin transcribed by SMK.

In the name of God Amen. I Enoch Sanderlin of Camden County & State of North Carolina Being of Sound and disposing mind & memory Blessed be God for the Same
do this the 12th of April AD one thousand eight hundred & forty
Make and Publish this my last Will & Testament in this following manner to wit
Give to the Children of my Brothers Maxey Sanderlin Wm Sanderlin and Dorsey Sanderlin all of my Estate of every description in the following Order,
One-half of all of my Property of every kind to my Said Brother Dorsey’s Children that he now has or may ever have to them & their heirs forever
And to the Children of my two Brothers Maxey Sanderlin & William Sanderlin, that they now have or may ever have, I give the other half of my estate.
All of my Estate of every description I leave to be sold by my Executor on such terms as he may think best. I at this moment ordain and appoint my friend Haywood Bell Executor to this my last Will & Testament.
I the Said Enoch Sanderlin have to this my last will Set my hand & Seal Enoch (x) Sanderlin seal
Witness: Isaac Berry Granby Howell
Camden County Court May Term 1840. Last Will of Enoch Sanderlin deceased is Exhibited in open Court and proven by Isaac Berry & Granby Howell Subscribing witnesses thereto. On motion ordered that the Will be Recorded and Haywood Bell the Executor within named appeared & Qualified as Such. Ordered his Letters Testamentary issued & C C G Lamb CK

From the Old North State 10 Aug, 1850 (abstracted by Fousts):
“Albemarle Institute, An English and Classical Boarding and Day School, for boys, Elizabeth City, North Carolina, George M Wilder, Principal. The subscriber will open on the last Monday in September next, an institution affording an extensive and thorough course of instruction for boys in all the various branches of an English and Classical Education.
The commodious Hotel of Maxey Sanderlin, Esq. has been engaged. Pupils from abroad can board in the family with the Principal., He assures all that he will watch the pupils committed to his charge carefully. The building is in a retired part of the Town, sufficiently removed from public view to ensuring freedom from all local influences that are calculated to defeat the ends of a course of mental training.

Mr. Sanderlin and lady well known in this community for their piety and moral worth will have the charge of the Boarding Department. They will spare no pains in making the boarders comfortable and happy, and in furnishings as good a table as the market can afford.” (edited by Sally) 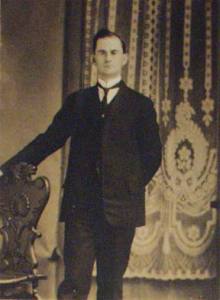 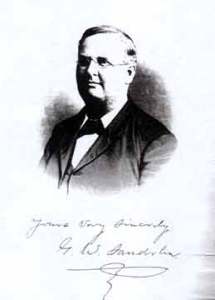 Enoch Sanderlin 1805 – 1840 never married
[in will dated 12 Apr 1840 proved at May ct 1840
left all his property to the children of his brothers Maxey Sanderlin, Wm. Sanderlin, and Dorsey Sanderlin.]