This is my working hypothesis – the way I see it as of this moment!!
I find the name written both as Truxtun and Truxton. 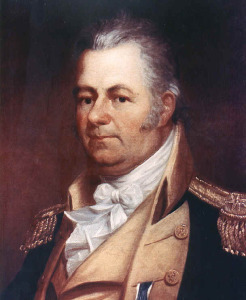 Book Review: In ‘Truxtun of the Constellation’, Ferguson tells the exciting story of a patriot who started as a teenaged merchant seaman, won command of his own ship, and became a privateer in the Revolutionary War. After the Revolution, he made four voyages to the Far East in the burgeoning China trade. He commanded the ship that brought Benjamin Franklin home to America from his ambassadorship to France.
The greatest period of Truxton’s career–and the source of his importance as a historical figure–came when he served as captain of the original Constellation, whose construction he oversaw in Baltimore. He commanded this historic frigate from the time she was launched in 1797 until her return from the undeclared naval war with France and the defeat of the heavier-armed La Vengeance in 1800

“The nation’s premier sea fighter in the Quasi War with France; he served in the merchant service for eight years before the American Revolution and was a privateersman during the Revolution, commanding Independence, Mars, and St. James operating in British waters. Appointed Captain in the new U.S. Navy in 1794, he superintended the construction of Constellation, and as Commanding Officer, captured L‚ÄôInsurgente and defeated La Vengeance in the West Indies.
He also was commissioning Commanding Officer of President. [1794-1801]

Thomas Truxtun was born 7 Feb 1755 in Jamaica, Queens County, Long Island, NY the son of Thomas Truxtun of Jamacia ,Long Island and his wife Sarah Axtill. Thomas Truxtun and Mary Fundran were married 27 Feb 1775 at Perth Amboy, NJ. They moved to Philadelphia whence he sailed as captain of merchant ships in trade with the Orient. The first nine of their twelve children were born in Philadelphia. They also lived in Cranbury, Middlesex County, NJ and in 1796 they returned to Perth Amboy where their three youngest children were born. They returned to Philadelphia and soon after Thomas was appointed high Sheriff of the city and county of Philadelphia until 1819. Then his health began to fail him. He died testate 5 May 1822 at his residence, #328 Arch Street above Eleventh, Philadelphia, and was buried on the 7th in Christ Church cemetery. His gravestone is inscribed: “Sacred to the memory of Commodore Thomas Truxtun formerly of the US Navy who died May 5th 1822 aged 67 years.”

Mary Fundran was born 27 Oct 1759 at Perth Amboy NJ — apparently daughter of the William Fundran “mariner” and Deborah Islestine “spinster” both of Perth Amboy, who were married with a license bond of 18 Dec 1752. The Register of Christ Church, Philadelphia show that “Mary wife of Thomas Truxton, an adult” was baptised 17 Nov 1778 at the same time as “Sarah, daughter of Thomas and Mary Truxton.”
Mary Fundran Truxtun, widow of Commodore Thomas Truxton died intestate 9 Sept 1823 in her 64th year.

Will of Thomas Truxtun, Esq. 4 Nov 1820 – prob. 18 May 1822 Philadelphia Co PA
– Income of my estate to my wife: Mary Truxtun for herself and my unmarried daughters: Cornelia, Gertrude. After decease of said wife, estate to my daughters: Elizabeth, wife of Theodore Talbot, Anna Maria wife of Dr. Thomas Henderson, Mary wife of John Swift, Esq, Emily wife of George Beal, Cornelia, Gertrude.
– Whereas I did give to my daughter Eliza or her husband in joint company with Henry Hammond or Evelina his wife land in Wayne County, Penna., which has been sold for taxes, my will is that $1000 be deducted from Elizabeth’s share of my estate.
– Whereas I did give daughter Anna Maria after her marriage to Dr. Henderson (through Charles Biddle, Esq, $300) also proceeds from my share of Washington City lots purchased from late Benjamin Stoddert, Esq. $700 less be given her.
– “My valuable books to be equally divided among my six daughters and not sold at auction.”
– “No demand to be made of Henry Benbridge for the bond I hold of him, as it might distress his family, nor of William Truxtun for his maintance heretofore, and the sums of money expended on him before he came of age when he should have provided for himself and become respectable, nor of Evelina Hamond up to the date of this instrument for her board and clothing for herself and children, nor for neglect in attending to Wayne County Lands as that neglect I impute to her husband Henry Hammond.”
– Devises “My gold watch, seal key and Badge of the Cincinnati to my grandson: Truxtun Swift. My excellent brass sextant made by Ramsdel in London and telescope to my grandson Truxtun Henderson, All my other instruments and cloaths to my grandson Truxtun Beal. my full likeness picture to my daughter Elizabeth; the elegant rich silver urn given to me by the merchants and underwriters of Lloyds’s London, and the case containing it with the gold medal voted me by Congress, the former in honor of making prize of the French National Frigate La Insurgent of 40 guns and the latter for vanquishing the French National Frigate LaVengeance of 54 guns which services I performed with U. S. Frigate Constellation of 38 guns under my command, I give the first to my daughter Cornelia and the latter to my daughter Gertrude, they being the youngest of my children. And I direct that these testimonials of the transactions which produced them may be preserved in the family as memorials of two naval actions performed in the very infancy of the Navy of the United States of North America, as much for the encouragement and imitation of those who succeed the commanders of the present day as to perpetuate my gratitude to those who have favored me with so honorable an evidence of their sense of the services I have rendered my country. I constitute and appoint my wife Mary Truxtun executrix.

Letters of Administration upon the estate of Mary Truxtun deceased were granted 21 Oct 1823 to Aquilla A Browne. 17 July 1829 he petitioned to be discharged from his trust as adm. of Thomas Truxtun and of Mary Truxtun, both deceased. So discharged.

Thomas Truxtun and Sarah Axtill, both of Jamaica with license, were married at Hempstead 1756 April 15 according to the register of St. George’s Church, Hempstead, LI – published in Height, Adventures for God, 1932 p169 and NY Genealog. & Biogr. Record XII, 145.

Thomas Truxtun St of Jamaica, LI, an eminent English lawyer, a charter member of the parish church of that place [1761], lived on a plantation of 212 acres on the north side of Hempstead Plains – Thompson, “History of Long Island, NY,” 1918 vol 3, 447

Sarah Axtill, I suspect, connects in some way to this family. [maybe Daniel Axtill who married Thankful Pratt or maybe she descends from the William who went to Jamaica WI.]

. . . Thomas Truxtun Sr. came from England to Jamaica, LI via the West Indies as his Will indicates. One William Truxtun married Temperance Reeves on 9 Sept 1677 at St. Andrew’s, Jamaica, West Indies.[Carribeana vol 1] One Thomas Truxton was married to Elizabeth Harrison on 26 Nov 1761, according to the Register of Trinity Church NYC [NY Gen. & Bio. Record LXX 167] and license was granted to Thomas Truxtun and Elizabeth Harrison on 25 Nov 1761 [Calendar of marriage licenses issued by the Secretary of the Province of New York to 1784, p 399]

Will of Thomas Truxtun 18 Nov 1761 – prob. 24 Oct 1765 Jamacia, LI, NY
“Gentleman, being bound out on a voyage to parts remote beyond seas”
– “unto my son, Thomas born of the body of my late most valuable dear and affectionate wife, Sarah Truxtun, all my estate in this Province, consisting in cash, bonds, notes, account books, book debts, plate, and things whatsoever, to hold to him, his heirs and assigns forever, provided he attains the age of twenty-one years. But if he departs this life before he comes to that age, then I give the whole of my estate to his two sisters Sarah Frances Truxtun and Elizabeth Truxtun, and to the survivor of them.
– In regard to any estate or estates that I am now entitled unto in the Island of Jamaica in the West Indies, or shall be entitled unto or interested in there, in England or elsewhere at the time of my death, I give devise and bequeath unto him a full moiety or half part of all such estate or estates, excepting thereout whatsoever sum or sums of money which are now due and owing unto me in the Island of Jamaica or shall be due and owing from the Honorable Philip Pinnock, Esquire. which I give equally unto my two daughters above mentioned Sarah Frances and Elizabeth, to hold unto him in like manner as I have given him my said son my estate in this Province, and in case of his death as aforesaid then to go to my two aforesaid daughters. . . I do constitute and appoint my esteemed friend Mr. John Troup of this aforesaid town of Jamaica my sole executor touching my said estate in this Province and guardian over the body of my said son Thomas.”
Wit: James Cebra, Nehemiah Denton, Thomas Hinchman.
Rec. in NYC Will Book #25 page 172

Will of Joseph Guerard Nancrede, MD 21 Feb 1849 – prob. 9 Feb 1857 Phila.
– devises all estate to nephew, “the eldest son of my brother-in-law John H Houston of Washington, DC, known as my son by the name of Joseph Guerard Nancrede, who has resided as such under my roof from infancy,” and appoints him sole executor.
In a Codicil 22 Dec 1856, testator recites the decree of Court of Philadelphia County of 20 Dec 1856 “which established my adoption of the said Samuel Joseph Guerard Nancrede as my son” redeclares the Will, and devises also $100.00 to the orphans of St. John’s Asylum. Rec. Phila. Will Book #37, page 261

Memorial of Joseph G. Nancrede, Vaccine Physician, Philadelphia, January 14,
1828, Read, and Laid Upon the Table (cover title)
Printed By Gales & Seaton. Washington. 1828. Self Wrappers. 5-page
pamphlet. “20th Congress, 1st Session. (Doc. No. 66) Ho. of Reps.” Disbound.
Uncut page edges. Plea to exterminate small-pox. “To the Senate and House of
Representatives…” “Having been entrusted, since the year 1816, with the
public vaccination of the city of Philadelphia, he has constantly sought, by
every means in his reach, to promote the diffusion of the cow-pock; and,
under the impression that Congress will consider the present a favorable
moment, to receive his suggestions, he confidently proceeds to state the
reasons which, in his belief, will support his views”. Small-Pox
Extermination. Presentation. Request. Plea. Doctor. Vaccinate. Public
Health. (Book ID 4753) $25.00

NANCREDE, Paul Joseph Guerard de, soldier, born in France in 1760; died in
Paris in 1841. He came to this country in the army of Count Rochambeau, in
which he served as a lieutenant, and was wounded at Yorktown.
From 1787 till 1800 he was instructor in French at Harvard,
and he afterward resided for some time in Philadelphia.
He edited “L’Abeille Frangoise” (1792).
–His son, Joseph Guerard, physician, born in Boston, Massachusetts, in June, 1793 ;
died in Philadelphia, Pennsylvania, 2 February, 1857,
was educated chiefly in Montreal and Paris,
but returned to this country, through fear of conscription,
and was graduated in medicine at the University of Pennsylvania in 1813.
He resided in Louisville, Kentucky, till 1816, and
then in Philadelphia till his death, practicing largely among French
families, and numbering Joseph Bonaparte among his patients.
Dr. Nancrede married Cornelia, daughter of Commander Truxton.
He contributed to current professional literature,
and edited Legallois’s “Experiments on the Principles of Life,”
with his brother, Dr. Nicholas Nancrede (Philadelphia, 1818),
and an abridgment of Orfila’s “Toxicology,”
which was commended by the author (1817).