We are told by Wheeler, Moore, and Winborne that Matthias Brickell, a Native of Ireland, came to this country in 1729 with his brother Dr. John Brickell (Brickels) of Edenton, a naturalist, physician, & early historian along with Gov. Burrington.
[We also are told that John went on a joint commission to the Cherokee Indians in TN.]
Though we find no official record of Matthias ever being ordained an Episcopal minister he was the clerk of the Vestry of the Suffolk Parish for several years and is credited, by all three authors, with conducting services dating from 1730 at old St. Johns Chapel & at old Luke Chapel in present day Hertford County.
He was reputed to have “possessed high social qualities and culture and created in the minds of the people love and confidence.
They flocked to hear him at Ahoskie.”

There was a will by Mary Bonner in Chowan, Aug 1789, who lists a John Brickell, “son of my sister, Mourning Brickell…’ I believe this refers to Bertie John Brickell, whose mother was Mourning. e-mail Marcia

and around 1763 returned to VA settling on the Elizabeth river at what is now Portsmouth. He was a member of the VA legislature during the Revolutionary War but returned to Hertford Co where he died ca 1789/90.
“Another John Brickell evidently a farmer died at Enfield in Halifax in 1789.
Then there’s “Dr. John Brickell who practiced medicine at Savannah, GA in the last quarter of the 18th Century said to be a native of County Louth, Ireland, and a graduate of King’s College in New York.
And there’s a ref. in the records of Beaufort County to a “William Brickel, physitian” as a partner in a mining company formed at Bath in 1730. Merchant James Brickell was a resident of Bath from about 1735 until his death there in 1746. Parramore also notes that two of the subscribers to “Natural History” were William and James Brickell.

1782 John Brickell is the Senator from Hertford County.
Thomas Brickell was Mem. House Hertford 1781, 1782, 1783, 1784 & 1786
It is said that two were brothers — Wheeler and Moore both states they were sons of Col. Matthias; Winborne says they were their first cousins, sons of John Brickell and his wife Martha. Observation, Col. Matt’s son John would have just been 20 in 1782 so it is improbable that he was the Senator from Hertford. Maybe they were not brothers — methinks they are father and son.

e-mail from Charles Tillery [Dec 2002]
In checking my records, Nancy’s first husband was Thomas Tillery b.01/09/1734 in Richmond Co., Va. died between1772-1778. His father was George.
My ancestor was William, brother of your Jeremiah. 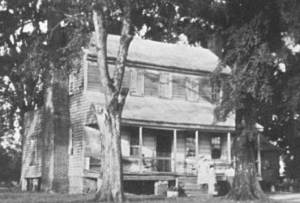 Oak Villa ca 1900 –
Sorry folks it appears this picture is misidentified!!!
John R Jordan Jr. writes “I am 82 years old and remember the house quite well. Indeed I recall the Christmas Eve when the great old house burned to the ground. Oak Villa was of an earlier period architecture than that of the house shown in the picture. The house shown appears to be the Wynn-Jordan house on the Murfreesboro Road. Both houses stood about the same distance from Winton. Oak Villa was to the south and Green Plains [the Wynn-Jordan house] was to the west.”
Mr. Jodan says he will try to locate a photograph of Oak Villa for us. That would be great!

Halifax County, NC Tax Lists 1782-1789 John Brickell is listed. Gammon abs.
Then in the census of 1790, under Matt Whitaker, for John Brickell decd.

e-mail from the uk Jan 02 — Chris Brickell
….”I believe that Brickell is an English name specifically local to Shaftesbury in North Dorset. Where does the line that Mathias and John Brickell came from Dublin start?”

from a new contact in the UK – Bob Irwin.
He writes “My mother is a Brickell and is very interested in the family history (as I get older my interest grows) My great grandfather, Robert Brickell was born in 1831 in Shaftesbury. Arthur Brickell (my great uncle) did quite a bit of family research.
Fortunately he wrote it up, here are a few snippets from his manuscript……..
“All the parishioners of Enmore Green (Shaftesbury, Dorset) have Brickell
blood in them”
“The Shaftesbury side of the family are direct descendants of John & Joan
Brickell of Brick Lane London who lived in the 15th Century”
Apparently he was a great benefactor leaving a lot of money to the poor
of London in his will of 1440.
Billingsgate Fish Market was mentioned in a deed of 1741 relating to
property in the Brickells charity.