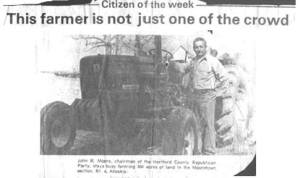 Ahoskie — John R Moore, chairman of the Hertford County Republican Party prefers to blaze his own trails.
He says, “philosophy is similar to that of most of the people around here, the only difference is I am a registered, bonifide Republican.”
Moore is one of a few. There are only 500 Republicans registered on Hertford County books, and only eight of them attended the party’s county convention last Saturday night to reelect Moore to his second term as county chairman.
Moore points out that there was no party organization for Republicans until about 10 years ago when county conventions started to be held and the local party began sending delegates to the District and State Conventions.
Moore will attend the District Convention in Grenville April 2 and the State Convention in Charlotte April 15-16 along with Mary Burkett, vice chairman, and Barbara Dixon, secretary.
Moore explains, “All my folks were Democrats and I was until the 1950’s. One of my reasons for registering as a Republican is that I feel strongly we should have a two-party system, even at the county level. We need to field candidates and give the voters more of a choice than they have been getting.”
Although Moore is his family’s first Republican, he is not the first of his family to depart from the crowd in terms of conformity. His great-great-grandfather was Dr. Godwin Cotten Moore, founder of Chowan College, and his great grandfather was John Wheeler Moore, who wrote the first rooster of Civil War Troops.
The county Republican chairman now farms 500 acres of land at the old Moore homeplace in the Mooretown section of Hertford County.
He lives with his wife Cecile, and their two younger sons, J. R. III, a student at Ahoskie High School, and Michael, a student at Ahoskie Middle School. Two older