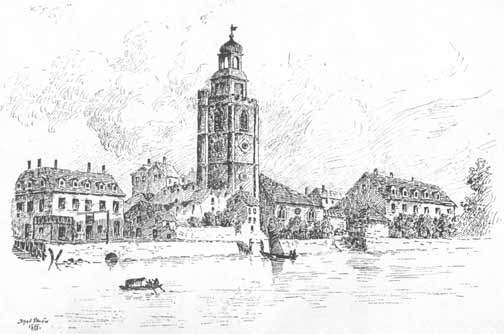 Sir John Lawrence, Knight, a wealthy merchant of London, was created a Baronet by James I on 9th Oct 1628. The title became extinct in April 1714. 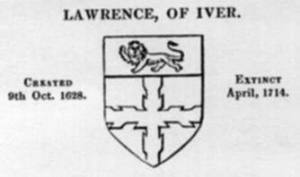 The Town and Country Homes of Sir John Lawrence 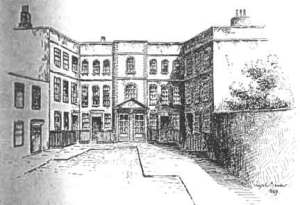 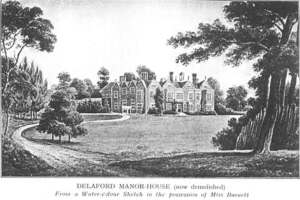 left: the home in Chelsea, Middlesex and on right Delafords in Iver, Bucks
more info on his father’s page

ca 1589 – John Lawrence was born the son of Thomas Lawrence of Chelsea, Middlesex, goldsmith, and his wife Martha Cage.
27 May 1603 -He entered Oxford (St. John’s College) at age 14.
29 October 1604 – received a B. A. from Oriel College.
ca 1608/09 – married Grissell, daughter and co-heir of Gervase Gibbons of Beneden in Kent.
26 January 1609/10 – John was knighted at Royston
7 July 1615 – received a M. A. from St. Edm Hall.
June 23, 1620 – purchased one share of stock in the Virginia Company in Virginia
9 October 1628 – made a baronet by James I
In June 1632 – Sir John Lawrence, “Adventurer”, and others, recorded their plans to transport three hundred colonists for agriculture, mining, etc., to Long Isle, about one hundred fifty miles north of Jamestown.
On August 24, 1635 -he was party to a suit in the High Court of Admiralty in London, and his kinsman and factor, Richard Bennett, testified concerning goods sent to Virginia on the ship Revenge
October 18, 1638 – Sir John Lawrence made his will
13 Nov 1838 – he died aged 50 years.
Sir John Lawrence was buried 14 Nov. 1638 in Lawrence Chapel in Chelsea 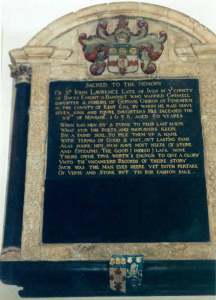 Arms — Arg. a cross raguly gules, on a chief azure, 3 leopards’ heads or, for Lawrence with the arms of Ulster, impaling sab. a lion ramp. guard, between 3 escallops or, for Gibbon.

Here rests ye weary Marchant, having tri’d
And finding this world’s trafflick vain delite
That empty trifle, and hee’s got to trad
In th’ other world for gaines which never fade;
Thence you shall see when he acquits this urne
Of everlasting crownes a brave returne;
The stock of goodness he imbarkt before
Ensures him there an hundred fold and more.
from

Note: The film record was very difficult to read – badly strached as well as small and crowded together.

But I Sally did make out the baptisims of Jno., Robert, G— , W—, Marmaduke was unmistakable, Debbie was very plain, Krissa, and Ann. The others were probably there but I tired of looking at that point and failed to look for burials or marriages as time ran out for the evening.

Will of Sir John Lawrence dated October 18, 1638, probated 21 Jan 1638/9.
I, Sir John Lawrence of Delefords and Iver, Bucks Kt. and Bt.,
desire to be buried in my Chapel at Chelsea.
All my interest in the Parsonage of Dorking, Surrey, which I, with my brother-in-law Richard Colville, purchased of Richard Hollman, to my sister Martha Jackson, widow, and she be dead at my decease same to her daughter Martha.
300¬£ to my eldest daughter, Ann Lawrence;
200¬£ to my second daughter Frances Lawrence;
bequests to servants;
all my interest in 7010¬£ which long since I recovered my judgement of Anne Babington, executrix of Vry Babington, dec., in H. M. Court of Exchequer due me from the estate of Robert Bromley, dec. Of what can be recovered 1/2 to my eldest son John Lawrence and the other moiety to my younger children.
100 marks towards the finishing of my house at Iver.
Rest of personal estate to my younger children, Anne, Robert, Frances, Grissell, and Henry, those age 21 to be paid soon as possible and the others to be paid at 21 or marriage.
All portions of my younger children to amount to 900¬£ apiece and all my houses and land at Chelsea to provide this.
* * * The settling of wife’s estate has cost me more at this date than double the value of her inheritance, were it to be sold. The legacies of 5000¬£ which I have given her younger children is more than double the value of her estate after her decease.
Wife Dame Grissell to sole extrx. provide she shall settle within 12 months after my death all her estate in lands and tenements on her eldest son John Lawrence and heirs male and in default of same to son Robert Lawrence, etc.
Witnesses Pugh Flood, clarke; Samuel Forest, John Hynde, Martha Jackson, Rice Thomas

In “Extinct and Dormant Baronetcies of England, Ireland, and Scotland”, it is stated that the second son of Sir Robert Lawence and Margaret Holden of Lancashire was Thomas Lawrence who was the father of Arthur Lawrence and that Arthur was the ancestor of John Lawrence, esq., of Delaford in Iver, Bucks, and of Chelsea, Middlesex, who was created a Baronet in 1628.

Sir John Lawrence 11 May 1610 – 1658, Chelsea and May Hempson had:
1. Sir Thomas Lawrence, Bart ca 1645 – April 1714 Chelsea
went to Maryland with Lionel Copley and was Secretary of the Colony, and President of the Council. On May 7 1694, he became Acting Governor of Maryland until Governor Nicholson arrived. Sir Thomas died and was buried at Chelsea in April 1714. He was the last to hold the title.
married Lady Lawrence who was buried 2 November 1723 in the old church.
a. Anne Lawrence died bef 1714
b. Thomas [or John] Lawrence died bef 1714
2. Martha Lawrence ca 1643 –
married Thomas Moore

The Old Church in Chelsea 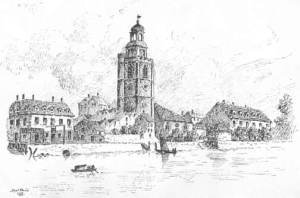 Chelsea in 1738, from a print of Thomas Priest of Chelsea
“the village in olden times was grouped round its riverside church” 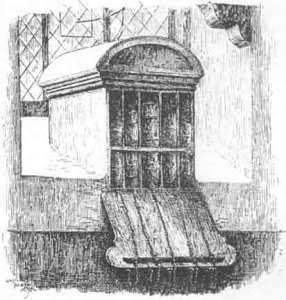 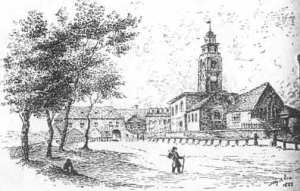 Chelsea Old Church in 1760 (after Chatelaine)
sketch by Beaver 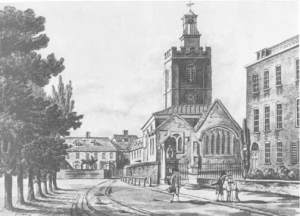 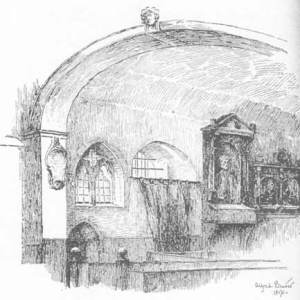 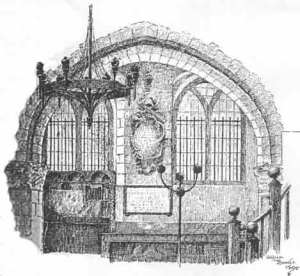 The oldest fabric of the church still standing dating from the early part of the fourteenth century is the north chantry or chapel which is known as The Lawrence Chapel from the family in who owned it for about a century and a half. It first became private property when Thomas Lawrence purchased some property in Chelsea and built a house near the church late in the sixteenth century. Being private property it escaped subsequent restorations — particularly that of 1667 and so retains some of its ancient features. In 1890 it was still in private hands. The Rev. H R Davies, MA incumbent of the church in 1887 said “From the determined manner in which we found the piscina and aumby blocked and plastered up and a niche in the north chapel where probably a statuette of the Virgin might have given the title of the Lady Chapel, it would seem Protestant zeal was at fever heat in Chelsea.”
In 1528 the More Chapel on the southeast was added. The date is carved on the arch between the chapel and the chancel. . . The ornaments on the east are obscurely allusive to the builder of the chapel. The ‘Moor’s head,’ the Chancellor’s well-known crest appears among them and the same shield as may be seen on the tomb. The arch is one of the most interesting things in the church, apart from the interest which attaches to any relic of Sir Thomas More, for it is one of the earliest examples of the Italian workmanship imported and fostered by Henry VIII. The chapel is 15 feet wide and 20 long [was longer at one time] the Rev Mr. Davies told the author (Mr. Beaver) that he believes that there was originally another arch corresponding to the one now existing and would account for the early descriptions of the chapel as an aisle. The change took place during the enlargement of 1667, when the aisles were lengthened to their present size. The western arch of the nave of the old building is still standing with the organ built in and around it. The More Chapel was private property and went with the house that More had built until it was acquired for the church.
The parish registers were commenced in 1559. Except for some omissions especially during the Commonwealth period, the register has been fully and accurately kept. 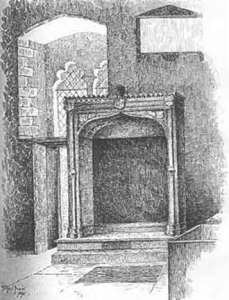 Sir Thomas More’s Monument
It is an altar-tomb, set against the south wall of the chancel, erected by More himself in 1532.
The Tudor arch has a cornice ornamented with foliage, with his crest — the Moor’s head — in the centre. The spandrils, decorated with vine-branches, bear the shields of himself and his two wives, the first of whom is here buried. More wrote her epitaph himself in Latin of course. It seems that More had included in his inscription to his first wife the word ‘haereticisque” (given in Weever’s copy 1631) which Sir John Lawrence in 1644 in repairing the inscription had omitted and a blank now stands in its place. 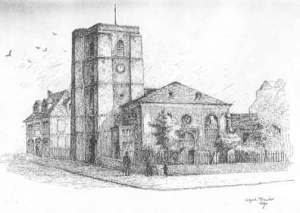 There are many other monuments to notable people in the old church of Chelsea.
All that could be deciphered in 1890 were given with complete inscription
in the Appendix of Mr. Alfred Beaver’s book “Memorials of Old Chelsea” 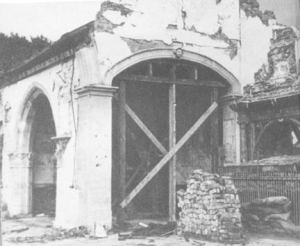 Chelsea Old Church, after the bombing of 16 April 1941
“the west end of the church had dissolved into a pile of rubble”
[the two chapels were made of stone – the body of the church was of red brick]
It was agreed that Chelsea Old Church be rebuilt on its old foundations as a new parish church.
It was rebuilt on the general plan of the old one. In July 1950 the More Chapel was reopened for services. The chancel and the Lawrence Chapel were restored and rededicated a few years later and by May 1958 the new church was reconsecrated. So much of Chelsea Old Church today is only a few years old.
from”Two Villages” by Mary Cathcart Borer 1973 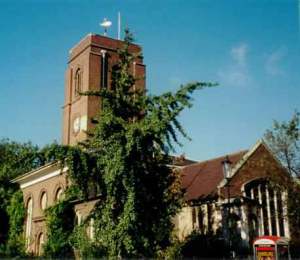