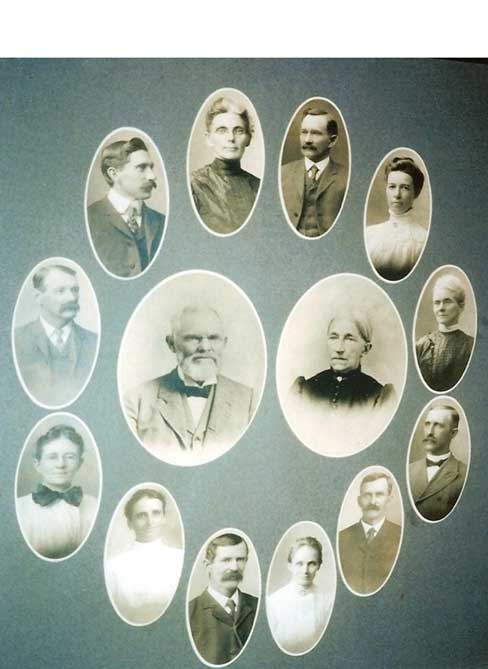 dna results show this family belongs to the Haplogroup R1a1 rep. by p37

This is my working hypothesis – the way I see it as of this moment!!
looking at research report of Rebecca Dozier 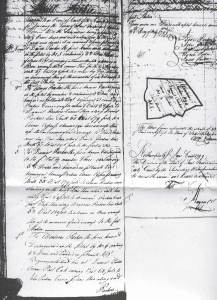 I have been looking over documents about these folk. I bought two rolls of microfilm. I now believe it makes it quite sure, that the records on the two Amoses are defined. I am going to send you what I have found in the hopes you can give me feedback. I will be sending this in more than one email. This attachment shows Elizabeth Smith Parker with her children on the 1850 Northampton Co., NC census.

On the documents for this Elizabeth, there was a Solomon Smith who signed. According to Becky Dozier’s study, he is a son of Richard Smith. and Millie/Mildred Stephenson. There is also a Jesse Smith who signs. He is another son of Richard Smith. In 1813, my third great grandfather, David Parker, sold Joseph Smith some of his land in Northampton Co., NC. I believe this fills in a gap. I had wondered who this Joseph Smith was, and how he might be related to our Parker family.
I believe Elizabeth Smith Parker must be a daughter of one of these Smith brothers. She married Amos Parker. There were other Smith brothers mentioned in Becky’s book. Amos Parker, husband of Elizabeth Smith Parker, died in 1831. I now have copies of the documents pertaining to the disbursement of his estate.
I also have found the disbursement of Amos Parker’s (husband of Mary Farlee Parker) estate. On one of these documents, it gives Saul’s wife, Charity Parker as one of the persons who was dealt with, with past accounts. Please look these over carefully, and let me know what you think about my observations.
Thank you very much.
Kathy Jo Bryant

Amos Parker was an elder son of James Parker, son of John, son of Peter Parker who left will 5 Sept. 1716, prob 22 April 1720 Chowan Ct. per Mrs. Fouts.
(My mother always said that there were Parkers in Gates County that were not relatives.)

Mary was the daughter of James and Rachel Farlee per the will of James Farlee of Chowan Co 12 Jan 1750/51. naming his daughter Mary Parker . . . Amos Parker was a witness to the will. 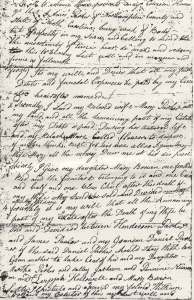 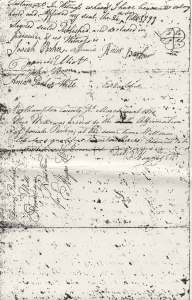 observations by Norma A Flythe 7/11/88 letter:
[looking at will of Amos Parker] note that his executor is William Copeland.
William Copeland was a Quaker who married Judith Parker daughter of Joseph Parker Jr who died in 1792.
Josiah Parker who was witness to will of Amos was brother of Judith.
Look at the original record of Amos Parker’s death in Quaker records.
It is here in the Quaker Library in Woodland.
The book has him dying in 1804 which is wrong.
His death is before the March Court in 1800.
the death of Mary seems correct since it says 5 Sept. 1812
and Wm Copeland shows Henry Sauls made a coffin 5 Sept 1812. 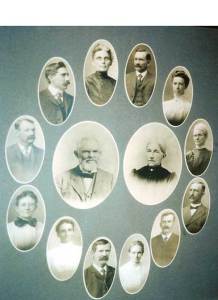 I thought you all might enjoy this photo Howard and I took at the home of George Clarkson Parker last June. This is a family group photo hanging on the wall in the hall of George’s home in Bakersfield, CA. The couple in the middle is John Peele Parker, and his wife, Miriam Hill Parker. Starting at the top: 1.(Laura White Parker, & Clarkson H. Parker), next couples on outside edges of oval: 2.(John Oscar Parker, & Leora Jessup Parker), 3.( Benjamin Franklin Parker, & Mary Kinsey Parker), 4.( Alice Parker Chappel, & Thomas Chappel), 5.( Almira Parker Brown, & Oliver Brown), 6.(Samuel Murray Parker, & Florence Macy Parker). George descends from Clarkson H. Parker & Laura White Parker.
Don’t you think John Peele Parker, the man in the middle of the photo looks a lot like Grandpa Joseph Parker? John Peele Parker’s father was Samuel Parker married to Martha Peele.
Samuel was a son of Josiah Parker. This is the Josiah Parker whose name is on many of our Parker documents. Josiah’s father was Joseph Parker, and Joseph’s father was another Joseph Parker. In Ray Fouts book, she gives Thomas Parker as the father of Joseph Parker and Peter Parker. Peter Parker is given as the great grandfather of Amos Parker, who I have found is the father of our Saul.
So Josiah Parker and Amos Parker are cousins, according to Ray. Kathy Jo 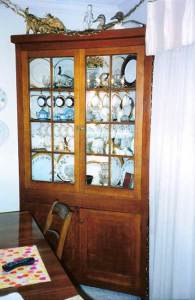