Sources include the Bible Records of James Ward,
newspaper accounts and other records of Edgecombe County
Plus the Norfleet compilations of Stuart H Hill, W A Clark, Filmore Norfleet, Claiborne T Smith Jr and Dr. Lyn Hart found at the Web sites of Philip Norfleet and Molly Urquhart and elsewhere.
Notes from David B Gammon 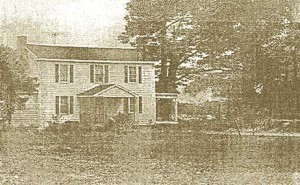 Isacc Norfleet was born in Chowan County in 1780 the oldest son of Abraham Norfleet and 2nd wife, Sarah Lewis.
He was a merchant and had stores in Hertford, Bertie, and Edgecombe Counties.
Isaac moved to Bertie County and then on to Edgecombe before 1820 when he was in charge of the census for that county.
He was “a light in the Primitive Baptist Church of Edgecombe and the Kehukee Assoc.”
He died 11 Oct 1844, age 64. 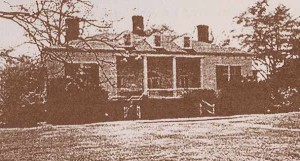 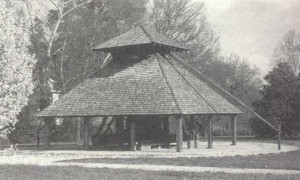 Uncle Isaac Norfleet [1780 – 1844] constructed this press on his plantation southwest of Tarboro ca 1840. Originally used to press fruit for cider and wine, it was converted to process cotton about 1860. The structure stands 22 feet high and contains a central vertical shaft. A large wooden screw 19 inches in diameter and powered by mules hitched to the sweeps — long beams attached to the top of the shaft. This shaft drove down a wooden packing block to compress 300 to 350 lbs of cotton into bales. The Edgecombe Historical Society moved the press to the Town Commons of Tarboro, NC ca 1938 and restored it in 1976. Such structures were once frequent sight in cotton growing areas. [found in “A Guide to the Historic Architecture of Eastern North Carolina by Bishir & Southern. 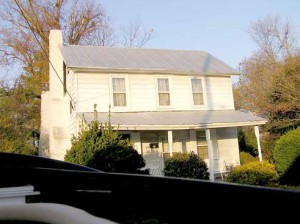 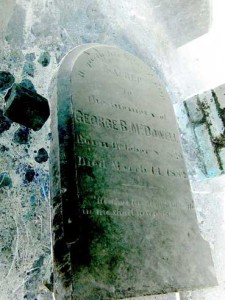 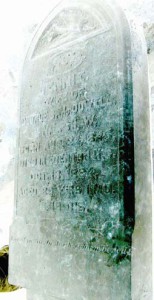 tombstones of Jennie and George B McDowell
located under the Edenton Baptist Church
photos by Joe and Sandy Kvech
“The graves were in the middle of the crawl space and good lighting was
impossible. I took three different types of lights with me not counting
the flash but could not get good shots. The ceiling was too low to get far
enough away to view the entire stones so we did the best we could.
Changing the shots to negative made it easier to see the writing. The
photos have good detail but will probably need to be blown up for reading.
The negative image also adds an eerie, otherworldly feeling to the subject
matter as well.”

Sarah Lewis Norfleet married 2nd John Freeman of Bertie County
She died testate in Bertie in 1807.
note – I think from her will that this Sarah was the 2nd wife of Abraham Norfleet as she makes a bequest in her will to her daughter in law [step-daughter] Elizabeth Parker. I also do not think she was Sarah Gordon daughter of John Gordon who died in 1794. That Sarah Gordon married a James Norfleet and then Thomas Hunter.

[John] Norfleet, son of John Norfleet and his wife, was born 21 Jul 1699
Elizabeth Riddick, daughter of Abraham and Pleasant Riddick was born 5 Apr 1710
John Norfleet and Elizabeth Riddick were married 28 May 1727 per Filmore Norfleet, transcription of the fragmentary records of a Bible found in an old barn near Box Elder VA – It had at one time belonged to Abram Norfleet 1774-1827.
12 Feb 1789 a Gates Co Ct order for the final division of the estate of John and Elizabeth Norfleet lists their names -six sons and five daughters as follows: Abraham Norfleet, John Norfleet, James Norfleet, Hezakiah Norfleet, Elisha Norfleet, Jacob Norfleet. Pleasant Twine, Esther Winborn, Elizabeth Norfleet , Barsheba Gordon, and Mary Ellis.
Will of John Norfleet 10 Sept 1753 – prob. April Ct 1754 Chowan Co NC
– son Abraham Norfleet – all the Land and Plantation that I bought of Henry Styles lieing on Rockahock Cr.
also two Red Pide Stears about 5 Year old, and five sheep [one Ram and fous Ewes]
– loving Wife Elisabeth Norfleet – the Plantation whereon I now Live with all my Lands thereunto belonging, also my Grist Mill and the Land belonging thereunto, together with my Island and all the marsh & land thereunto belonging – to hold during her widowhood. Also the use of all my Negroes and other Estate.
– to son Jacob Norfleet – I give the Houses Plantation and all the Lands thereunto belonging after my wife’s decease.
– Item: I give my Island and Marsh being Three hundred and Sixteen and a half acres, after my wife’s deseas, to be equally divided amongst all my children sons and daughters, but my son John to have his first choice. . . but that neither of them shall sell or assign their part unless it be to a brother or sister.
And if my Wife should Happen to Marry again after my death then my will and desire is that my Grist Mill and the Land there unto belonging and also my Copper Still shall be sold at Publick Sale to the Highest Bidder for Ready money after my wife’s deceas or Marriage. and out of the money so arising and the Residue of my Personal Estate I give to Each and Every one of my Children Except my Son Abraham the Sum of Twenty five Pounds Virginia Money. And a good Feather Bed to Each Except my son Abraham and my Daughter Plaeasant who have already received theirs. And if my Estate after the Still, mill, and Negroes are sold at Publick Sale to the highest bidders amounts to more money; then my will and desire is that the remainder be equally Divided amongst all my children without Exception. I mean share and share alike and
Lastly I make and ordain my Loving Wife Elisabeth Norfleet Executrix and my son John Norfleet and my son James Norfleet Executors to this my Last Will and Testament…
Note the provision for the division of “Island and Marsh” This land was divided after Elizabeth’s death in 1783 among the eleven surviving children. most of whom immediately sold their shares to others. These land records of Gates County gave Filmore Norfleet and Claiborne T Smith Jr the names of John’s sons and daughters as well as the names of many of the spouses.

On 17 March 1799, Judith Norfleet Baker wrote a letter to Bishop Asbury:
“…When you were with me last, you desired I would give you an account of the dear saints who are fallen asleep in Jesus, in this place. I will give you a list of their names with a sketch of some of their characters.
Elizabeth Norfleet, one of the first that embraced religion after the gospel was preached here; she was one of the meekest women, a pattern of piety to the end of her days” [Francis Asbury had first preached in Gates County area in the summer of 1780.]

9. Jacob Norfleet 17 Aug 1743 – bef Aug 1780
Will: written 12 Dec 1778 – prob Aug 1780 Gates Co Will Book 1, page 7
Lastly, I nominate and appoint my loving wife Elizabeth Norfleet, and my son Kinchen Norfleet, and my brother Abraham Norfleet, to be my Executrix and Executors
Test:Willis Wiggins, Keziar (X) Knigh
Will was proven in open court at the August term of 1780 by the oath of Willis Wiggins,
with Elizabeth Norfleet appointed as Executrix. Law Baker, Clerk
married Elizabeth Kinchen d. 1790 [?DBG says Arnell]
First, I leave to my loving wife Elizabeth Norfleet, the use of my
plantation and lands and houses whereon I now live; also the labour and
use of my negro woman named Rachel, for and during her natural life or
widowhood, whichever may first happen.
a. Elizabeth Norfleet
Item, I give to my daughter Elizabeth Norfleet, one negro girl named
Rosie, one feather bed and furniture, one cow and calf, three ewes and
one ram, to her and her heirs and assigns forever.
b. Kinchen Norfleet 12 Sept 1775 Chowan Co NC – Aug 1849 Gates Co NC
apprenticed in 1791 age 16 to learn to be a carpenter
Item, I give to my son Kinchen Norfleet, the plantation and land whereon I now live, together with all my lands thereunto belonging, after his mother’s death or marriage, to him and his heirs and assigns forever. I also give unto my said son Kinchen Norfleet all my part of land and marsh at Orepeak, to him and heirs and assign forever. I also give to my said son Kinchen Norfleet, one negro boy named Joe, and one feather bed and furniture, to him and his heirs and assigns forever.
Will of Kinchen Norfleet Contributed by Bill Sinclair
Will as Recorded in The Record of Wills, Gates County, NC, Book 3, pgs. 120-121
Will Probated Aug. 1849 in Gates Co. In the name of God Amen:
Know all men by these present that I , Kinchen Norfleet, of
the County of Gates an State of North Carolina, being low in health yet
possessing my right mind, do make this my last Will and Testament.
Item 1st. I give and bequeath to my three sons Marmaduke Norfleet, Seth R. Norfleet and James J. Norfleet to them and their heirs each of my creek mills, including all my land above So. Mill covered by the waters, one acre at each end of the damn, and fifty feet below running parallel with sd. damn to take possession the first day of January 1851 at which time the present sent by which it is encumbered expires.
Item 2nd. I will that all my land and chattel estate be sold, from the proceeds all my lawful debts be paid, the remainder with all my negroes to be equally divided between all my children, viz: John R. Norfleet, Nancy Jordan, Susan B. Walton, and James J. Norfleet and their heirs forever.-
Item 3rd. I leave my sons Marmaduke Norfleet and Seth R. Norfleet my
special executors.
Given under my hand and seal, this 23rd day of January 1849. Kinchen Norfleet (seal)
Signed, sealed & in the presents of Allen Smith, James Rawls
married 4 June 1800 Sarah Riddick
i. Nancy Norfleet 1802 –
married 4 June 1839 Thomas Jordan
ii. John Riddick Norfleet 4 Mar 1805 – 11 April 1859 Miss
married Harriett Usher Cross ca 1811 – 27 Nov 1838 age 26
[in the 27th year of her life]
from the Bible records of Miss Virgie Cross
[I suspect that 1820 is a misreading of 1830 on someone’s part]
1. Patrick Henry Norfleet 9 May 1830 – 9 June 1831 ts [corrected]
2. Sally Norfleet ca 1833 –
3. Leah Norfleet ca 1836-
married 2nd Elleanor Baker ca 1812 – 7 Dec 1857 age 35 [in the 36th year of her life]
list of children from the graveyard record below
1. Julia E. Josephine Norfleet 25 Sept 1841 – 25 Sept 1842
2. Alexander Selkirk Norfleet 26 July 1843 – 24 Sept 1843
3. Eugenia Virginia Norfleet 6 Aug 1846 – 3 Apr 1847
4. Cora Cathleen Norfleet 17 Mar 1848 – 10 Oct 1861
5. —-Lle Norfleet Feb 1850 – 1858 [broken stone]
6. Marmaduke Norfleet 2 Sept 1851 – 8 June 1854
7. William Coopwood Norfleet 7 Mar 1854 – 20 Oct 1861

(remaining names are on individual stones)

The graveyard is unmarked and is located in a heavily wooded area. There is no indication of it being a part of a church cemetery and none is in the vicinity. All stones seem to be of granite material and appear to be professionally engraved.

I am interested in my own family geneaology and so hope this information will help someone. Bill Hylander

John Norfleet was son of Thomas Norfleet, the immigrant
His wife’s name was Esther – per information possessed by the descendants of Barsheba [nee Norfleet] Gordon.

25 April 1702 John Gordon patented 350 acres adjacent William Sumner at Orapeak Swamp (in Nansemond, but the land fell into North Carolina when the boundary was settled in 1728) Nugent III 59

The first record of a Norfleet in Virginia Colony was on 22 OCT 1666. “North Fleete,” recorded a 300-acre tract of land in the Land Office at Jamestown, acquired by assignment from John Skerrett, who had originally patented the land on 17 MAR 1654/55. Two years later, on 30 SEP 1668, “Thomas Northfleete” again recorded an entry for the same land, probably to correct the garbled name of the assignee.
(Virginia Land Patents and Grants–Patent Book No. 6, page 96.)

5 thoughts on “Five Generations of Norfleets”