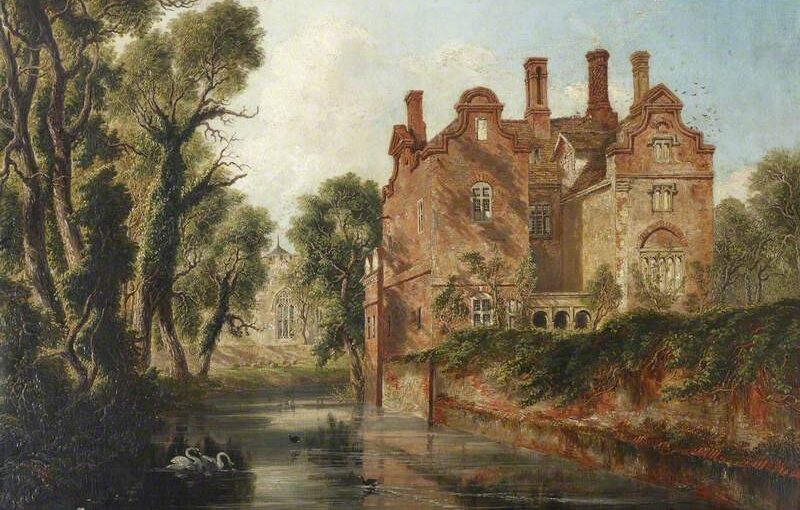 Working hypothesis – the way I see it as of this moment!!

John Cotton was born 24 Dec 1619 in Wood Ditton, Cambridge, England son of another John Cotton born about 1587 and his wife Elizabeth Ridge.

John attended Cambridge University from 1640 until 1643.
No further records of him were found in England.

179 Dated 12 Feb 1650/51 Recorded 17 Jan 1651 – These may testifye that to ye best of my knowledge and remembrance that Mr. John fferinhaugh was at ye Court at Nancimond ye 12 Feb 1648/9 being arrested at Mr. Hough(es) suite and then he ye sd fferinhaugh and Robte. Ewens did present heir accoumpts and Mr: fferinhaugh past his bill to Robte Ewen for 693 lb tob but since that tyme his house was burnt and ye bill and other bills burnt in it but I know and remember this debte and was witness to ye sd bill and further saith not.
Signed: John Sutton
Teste: W. Hancocke Cl Court Nancimond
Recorded 17 Jun 1651 – I was in company with Mr: John fferinhaugh when he made good xxx of this debte. I doe thinke in my consience that ye debte which Robte: Ewens demand is nothing just.
Teste: W. Hancock Proved in Court before Capt. Tho. Dewe, Mr. John Cotton, Mr. Lawson (This is the Nancimond Court).

1657 John Cotton is listed a member of a jury in Dec.1657
alongside Christopher and Richard Harris. in York County VA

The Wheeler plantation was in Hampton parish,
and there is a deed dated Feb 18, 1658/59,
by which Francis Wheeler sells all his land between King’s and Queen’s Creeks to Thomas Beale, who sold it to John Cotton, December 31, 1666,
who later conveyed it to Col. Nathaniel Bacon.
This Cotton as appears from a deed in 1666
had a wife Ann who was undoubtedly the famous “An Cotton of Queen’s Creek,”
who wrote the history of Bacon’s Rebellion.
John Cotton was a witness to Mrs. Wheeler’s will,
and received under its provisions, “a gold seal ring.” . .
. . .William and Mary College Quarterly 5 (1) 123-4)
1660, 21 Oct – daughter Mary baptized in Hungar parish.
1661, 8 Dec – son John baptized in Hungar parish.
1661 Will Drummond used John Cotton as a head right on 20 Sept 1661 for some land in Westmoreland.

1666 He appeared again as a head right on 26 Oct 1666 when John Paine was patenting on the Rappahannock.Isle of Wight rent rolls 1704–John Cotten–200 A.
1668
In a 1767 deed John Cotton noted that he had a proprietary grant dated 1 June 1668 of 640 acres north of the Roanoke river, land that was later in Northampton Co. NC
1676 John and Ann Cotton were living at Queen’s Creek.
An Cotton of Queen Creek wrote a narrative on Bacon’s Revolution
that has come down to us.
1677 John Cotton was living in York County
when he sued John Harris et al (York Deed and Will Book #6, p. 26)
Also see the deposition 1681 of an 1679 incident given below from the York County Records.

YORK COUNTY RECORDS–Gen of Va Families Vol 1 Tyler’s Q–
John Heyward, aged thirty-five years or thereabouts, sayeth
That yr Depont, in November last was two years, at the house of James Pardoe, and there did meet with Mr John Cotton who did come to demand tobacco
and yr said Depont & Mr Cotton did fall to drinking very hard by ye request of the sd James Pardoe
& did continue drinking all day till at night wee went to cards,
and at cards yr Depont & Mr Cotton had some words
& soe broke off from play
and did goe each of them to there rest,
but yr depont was ordered for to sleep along with the said Pardoe & his wife
in the same roome where all the Drink was,
soe yt yr Depont & ye said Pardoe did fall to drinking again,
and after some discourse the said Pardee did tell yr Depont yt Mr Cotton was come for to demand Tobo of him upon the accts of Thos. Bevins
but the said Pardoe did desire yr depont for to look over Tho. Bevins’ papers
& to see if his bill was not there among ye papers
& the said Pardoe did depart for some time out of the roome
& did bring some papers in his hand for your Deponent to looke over.
Yr Depont in looking over ye papers did find ye said Bevins’ his bill uncanselled and did give it to the said Pardoe
and yr depont will swear & further saith not.
John Heyward.

Will of John Cotton of York County VA  –
– Va records preserved in England.
In the name of God Amen. I John Cotton of the parish of Hampton in the county of York in Verginia, being weake in body but of perfect minde and memory and calling to minde the certainty of death and the uncertainty of the hour thereof, revoking all other wills by me heretofore made, do make and ordaine this my last will and testament.
Imprimis. I give unto my two daughters, Elizabeth Gardner and Anne Willis, each of them, the sum of fifty pounds sterling.
Item. I give and bequeathe to my son, John Cotton, 280 acres of land, my old plantation scituate on the west side of Chuckatock River in the counties of Nansimond and Isle of Wight.
Item. I give unto my daughter Dorothy Cotton the sum of 100 pounds sterling when she shall marry or attaine the age of twenty one years. I further give and bequeathe unto my daughter Dorothy one negroe girl called Rose, age about 12 years.
Item. I give unto my son John Cotton my black riding horse called by the name of B—
Item. I give and bequeathe unto my nephew John Ashberry of the Citty of London, son of my beloved sister Elizabeth, 20 pounds sterling and all of the stores belonging to me which are now in his possession.
Item. I give unto my nephew John Cotton of Elizabeth Citty County, son of my brother Thomas, deceased, my bay mare.
Item. I lend unto my beloved wife Anne during her natural life, the plantation whereon I now live with all of the household furniture and apurtenances thereunto belonging, and after her decease, I give unto my son John Cotton the aforesaid plantation, to him and his lawfully begotten heirs forever.
Item, After my just debts have been paid, I give all of the remainder of my personal estate not heretofore named to be divided equilly between my wife and my four children, Elizabeth Gardner, Anne Willis, John Cotton, and Dorothy Cotton.
I do hereby make and ordaine my beloved wife Anne Cotton executrix and my son John Cotton executor of this my last will and testament. In witness whereof I have hereunto set my hand and seal this 25th day of November 1683.
Witnesses Thomas Jones, Ann Bray, John Cooper

Letter from John Cotten to his wife dated June 9, 1676

To his Wife A. C. at Q. Creek.
My deare,
Allthough those who have depicted that fickle Godes,
Fortune, have represented her under various shapes,
there by to denote her inconstancys;
yet do I thinke there is not any thing sublunary
subjected to the vicissetudes of her temper
so much as is the condition and estate of man-kinde:
All things ells partakes som thing of a stedfast and perminent decree
excepting Man in the state of his affaires.
The sun is constant in his Anuall progress through the Zodiack,
the Moone in her changes,
the other Planits in their Asspects:
The productions of the Earth have a fixed constant season
for there groath and increase,
when that man (in his creation litle inferiour to the Angles) cannot promise unto-himself a fix’d condition, on this side Heaven.

How many hath thou and I read off,
that the sun hath shined upon in the East, with honours and Dignityes,
which his western beames hath seene
clouded with poverty, reproaches and contumelles.
The same moment that saw Ceaser cheife Man in the senate,
beheld him in a worss condition then the meanest slave in Rome;
and in less then 6 howers
Phoebus ey’d the Marqus of Ancrey,
in the midst of his Rustling traine of servitures,
not onely streameing out his blood,
but spurn’d and drag’d up and down the dirtie streets of Paris,
by the worst of mecanicks.
It is but the tother day that I did see N. B. (Nathaniel Bacon)
in the condition of a Tratour, to be tryed for his life;
who but a few days before was judged
the most accomplish’d Gen:man in Virginia to serve his King and countrey,
at the councell Table,
or to put a stop to the insolencies of the Heathen,
and the next day rais’d to his dignities againe;
Thus doth fortune sport her self with poore mortells,
som times mount them up in to the aire ( as Byes do Tennis balls)
that they may com with the grater violence downe,
and then a gane strike them a gainst the earth
that they may with ye grater speed mount up in to the Aire &c. &c.
From Towne, June 9, ’76PRINTED BY PETER FORCE-1835

This John Cotton was a son of Robert Cotton ca 1545, Landwade, CBG, England.

Michael Cotten – The will of John Cotton of York County mentioned a brother Thomas and a sister Elizabeth Ashberry. I found a lawsuit against a Walter Pratt filed by Elizabeth (Cotton) Ashberry and her siblings Thomas, Dorothy, and Isabella, children of John Cotton of Woodditton, Cambridgeshire. Family Search shows the christenings of Isabella and Thomas Cotton in Woodditton along with a brother John, born 1619, who was not involved in lawsuit. Cambridge University records show that this John Cotton was a student there from 1640 to 1643.
Woodditton belonged to the Cottons of Landwade.
There is a marriage agreement in 1609 in which Sir John Cotton of Landwade gave Woodditton to his nephew John at the time of his betrothal to Elizabeth Ridge. The younger John was the son of Sir John’s younger brother Robert. At the time the elder John Cotton was in his sixties and was married to his second wife. He had no children by either marriage so I assume he was intending to make his nephew his heir and was starting by giving him the lesser of his three estates – Landwade, Cheveley, and Woodditton. That changed when Sir John’s second wife died and at the age of seventy, he married a twenty something year old woman Ann Houghton by who he had three children. Two died but the surviving son John became his heir and was later made Baronet of Landwade. Sir John’s brother Robert and Robert’s son John are named in the Landwade Cotton entry of the visitations of Cambridgeshire as well as various other sources.

This Robert Cotton was a younger son of John Cotton 1512 – 1593 Landwade. and Isabell Spencer. 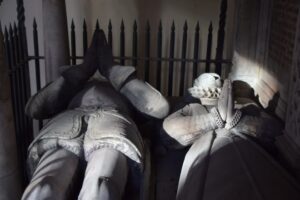 Sir Thomas’s first wife was Margery d. of Sir Philip Wentworth.
They had two daughters One married Crokett/Cocket and the other married Doyley
Joane d. & heire of Nic. Sharpe was his second wife.
Joane died 29 March 1496 at Landwade, Suffolk, England. 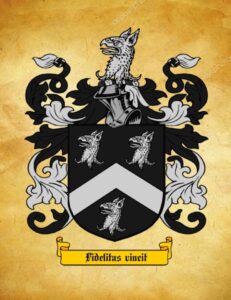 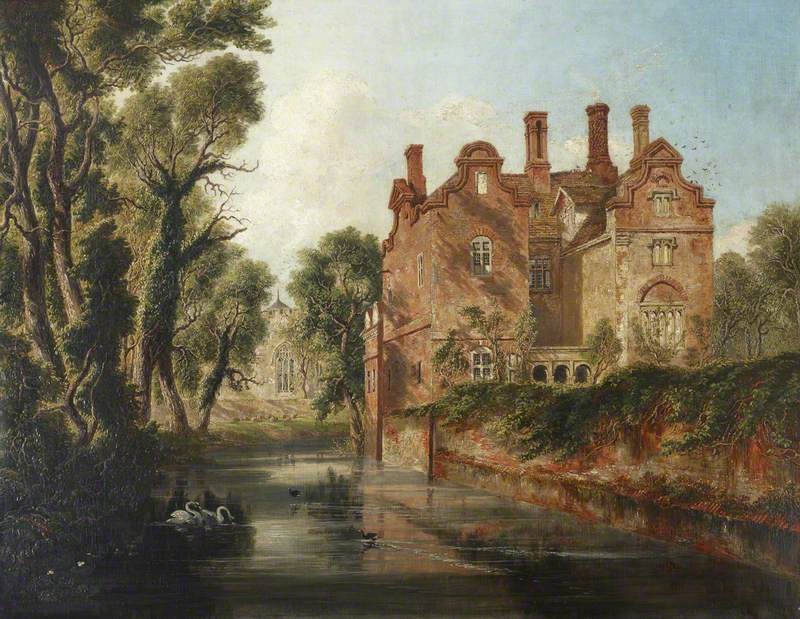 Aldeman of Cambridge.
He was born 1375 Cambridge Town.
He was a mercer.
Retired. Bought Landwade.
He died 14 May 1445 Landwade, Suffolk, England.
married ca 1399 Joan Rede in London, England.
Joan Rede was born before 1378 in Checkingden, Oxfordshire, England

“Here lies Walter Cotton sole rebuilder of this church, & Joan his wife, which Walter died 1445, on whose souls may God have mercy. Amen.” 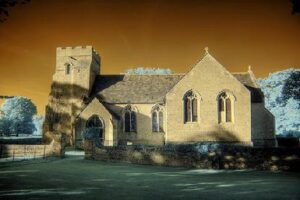 This John de Cotton was the Mayor of Cambridge.
He was born ca 1330 in Coton, Cambridgeshire, England.
Margaret was the daughter of Richard Grace and Bridgett